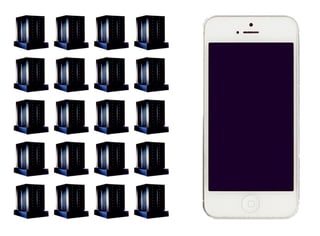 Smartphones are so ubiquitous that it is easy to forget the extraordinary technology we carry in our pockets. The 2015 generation smartphones have over twenty times the processing capability of IBM’s famous Deep Blue supercomputer, and they also feature a high-resolution camera and a wireless internet connection. With very little modification a smartphone can become a powerful, portable scientific instrument. Here are a few of the more unexpected smartphone applications.

In 2013, researchers from the Chinese Academy of Fishery Sciences reported a method to measure the length and weight of swamp eels using photogrammetry. Photogrammetry is the measurement of 3D objects using multiple photographs. In this case the researchers used smartphones to create “fast and accurate” measurements of eels… because there is a reason for the phrase “slippery as an eel.”

In 2015, Vijay Kumar’s robotics lab at University of Pennsylvania demonstrated a self-flying quad-copter controlled completely by an onboard cell phone. The algorithms running on the smartphone calculate the quad-copter’s three-dimensional location using images from the phone’s camera. This capability enables the quad-copter to maneuver itself without a human operator.

Starting in April 2013, NASA began launching smartphones into space as part the PhoneSat program. The goal of the project is to determine whether smartphones can act as the primary aviation electronics (avionics) of an orbiting “nanosatellite.” The satellites, costing only a few thousand dollars to develop, are proving to be quite successful. PhoneSat 2.4 is currently in orbit and can be tracked on NASA’s PhoneSat dashboard.

All of these applications rely on advanced optics to shrink cameras to millimeter dimensions. In our next article we will give an example of how Ross Optical is supporting the development of smartphone-based medical devices that put a “doctor in your pocket.”

Need lenses for your smarphone application? Learn about our micro optics down to 1.0 mm.